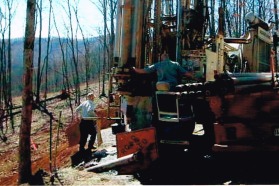 They started the drilling business in 1965 with a cable tool drill, working with their dad, Ervin Crane, who worked for a company by the name of E.L. Erwin of Sylva, NC. Prior to that, their dad worked for Branson Rogers, the first well driller in Macon County.

In 1967, Fred and Donnie, along with their dad, started their own business. Drilling wells at that time was a lot different than today.  They might drill 10 to 15 feet some days versus today, they can probably 400 feet.  Working with a cable too drill is much different than the rotary drills.  They were very young boys at the time, but took much pride in their work.  In 1970, they bought their first rotary drill, and then, in 1973, they went to Pennsylvania to pick up the drill.  They used that drill for several years.  In 1978, they purchased a Dilltech which they used for several years, also.  Then, they bought an Ingersoll Rand, which they are still using today.

Through the years, they have raised their families.  Fred and his wife, Jean, have two children (Rick Crane and wife Karen, Renee Burt and husband Bryan).  Rick has been working with them since graduation from high school in 1985.  He has been a big asset to the business.  Jean has worked in the business for many years, also.  Fred and Jean have four grandsons, Zachary and Xander Crane and Bryson and Dylan Burt who are the joy of their life.  Donne and wife JoAnn have three grandchildren, two grandsons, Braden and Jared Ledford, and a granddaughter, Charidy Ledford.  They are the joy of their lives, also.

Crane Bros. Well Drilling, Inc. is a small family business that takes very much pride in their work.  After all, water is our world’s greatest natural resource, which we cannot live without.  Hopefully, with the good Lord’s help, we can be drilling for many more years. 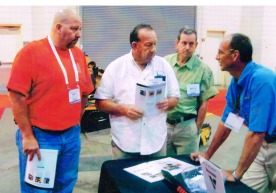 Over the years, we have met many great people in the water well industry.  We could not try to name them all, but they all have been great friends and fellow water well contractors.  We have seen many changes in the industry in our thirty-eight years.  Some have been good, some bad.  We have attended every Jubilee well show since 1977, except one in 1991, when sickness in the family kept us away.  This is our family vacation time.  We mix our work with a little pleasure, but we really look forward to the Jubilee every year.